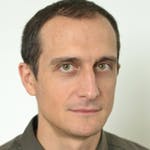 Viktor Kuncak is an associate professor in the EPFL School of Computer and Communication Sciences, where, since 2007, he leads the Laboratory for Automated Reasoning and Analysis (http://lara.epfl.ch). He works in formal methods with emphasis on algorithms and tools, such as Leon tool for verification and synthesis of Scala programs (http://leon.epfl.ch). His community service include co-chairing CAV 2017, SYNT 2015, FMCAD 2014, and VMCAI 2012. He also co-led an international COST Action to establish standardized formats for verification and synthesis (Rich Model Toolkit). His proposal on Implicit Programming, aiming to bridge the gap between human goals and their computational realizations, was funded in 2012 by a European Research Council (ERC) starting grant. Viktor Kuncak received a PhD degree from the Massachusetts Institute of Technology (MIT) in 2007.